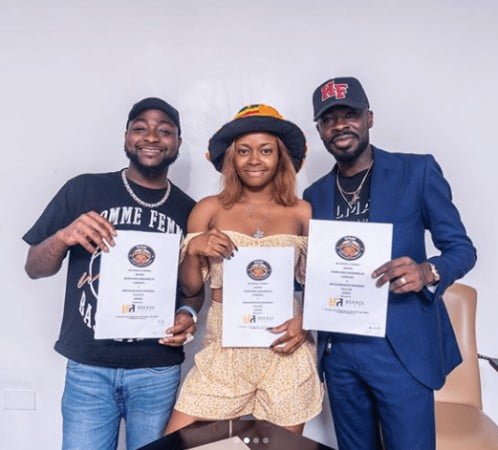 Multi award winning music art Davido officially unveils her signee Liya to DMW record label and making her the first female artist to be join the the 30 Billion Gang.

Today the FEM hit maker shared a tweet where he was with a female music art, and next tweet was that he will be signing his first female songstress. This caused many reactions among fans and then many dropped lots of tweet of encouragement as they welcome the new 30GB queen.

Liya is however now an official member of the Davido’s record label as the duo has sealed the contract in new photos shared on the new signee’s Instagram page. Thus, we might be seeing more hit songs from them soon, so stay tuned.

SEE ALSO: Davido Says He Was Mocked At US College For Being Black

While making the announcement, she wrote, “I kno this sounds cliche, but my dreams are coming true, here and now. @davidoofficial I will make you so proud, I appreciate you from the depth of my soul !

“I want this more than anything, thank you @vanzyvanz for believing in me, it means so much that I have a manager as passionate as you. As for me …. it’s official I AM 30 BG ???❤️#Firstlady #DMW”