Home
Celebrity News
BBNaija: Erica Reveals She Can’t Be In A Relationship With Laycon 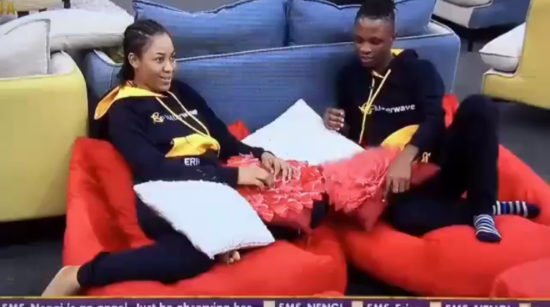 BBNaija Erica Can’t Be In A Relationship With Laycon they had a very important discussion about their feelings for each other read further.

Other but ended up being an emotional turn off for one of the house mate by which was the male LAYCON at which he was so heart broken since it wasn’t what he expected as Erica turned down his request.

His intention of being in a relationship with her was cut short as she mentioned she cannot date him, in her words “I CAN’T BE IN A RELATIONSHIP WITH YOU”.

And at which she went further to say she is only attracted to him mentally but is attracted to Kiddwaya physically.

However, she revealed that she had no interest in having him for such reasons but wish to keep him as a friend too In their conversation, Erica explained to Laycon that what she feels for him may not lead them to a relationship. During the conversation, Erica told Laycon that she is only mentally attracted to him but physically attracted to Kiddwaya.

“I’ve decided not to overthink anything with Kiddwaya ,I just want to be happy.

Watch the video below:

Laycon: Are you attracted to me?

Laycon should just focus on his goal and leave Erica

Watch the video to see what they said: