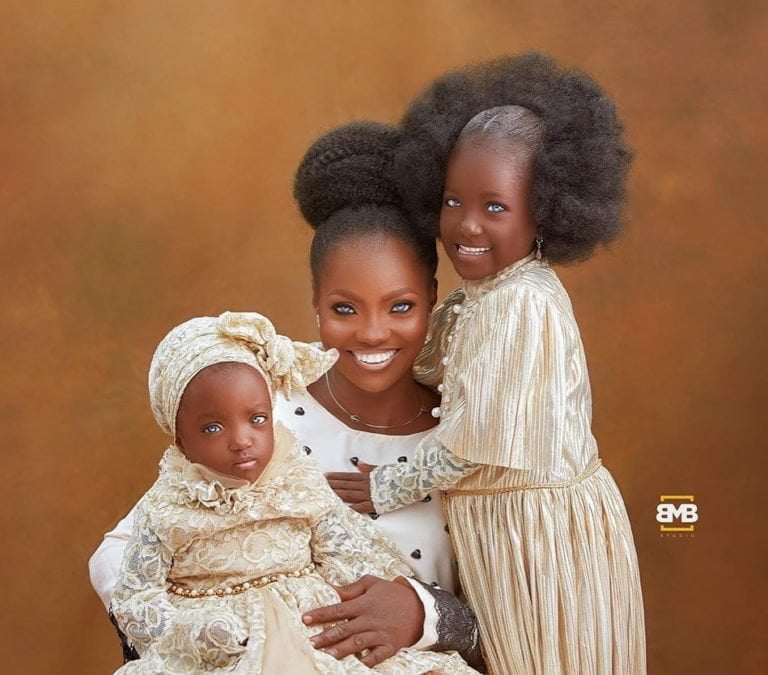 Checkout  the story of Risikat Azeez, the beautiful lady who said she was abandoned by her husband because she and her kids, Kaosarat and Hassanat had blue eyes. This is so touching as one would wonder why the so called husband will just abandon such great responsibility of parenting to only their mother because of such trivial issue.

Speaking with Punch, Risikat disclosed that:

“No one had this set of eyes before me in my family; both from my mother and father’s side. I’m the first to have this kind of eyes. And when I started bearing children, they also have it and I did not regret that I have this set of eyes with my children.

My husband whose name is Abdul Wasiu Omo-Dada is very aware of the condition of my eyes and he loved me for who I am. Things started getting bad when I had my first child and later my second child. He totally changed and he would shut me up and walk out on me whenever I tried to start a conversation with him.

His parents even told him, ‘Will you keep on giving birth to children with this kind of eyes?’ He changed to the extent that he would leave the house for a whole week before coming back home. There was no food and no provision that I had to go to my parents’ place to feed.

My parents later asked me to leave his house. Since I left till now, he has not shown up to ask why I left or ask after me.

My first daughter who is almost five years old has never attended a school before but I will like them to be educated.”

However, Risikat’s  husband Abdulwasiu Omo-Dada, in an interview with Punch said he didn’t abandon her because of her blue eyes, but her waywardness and carefree attitude,  he said he could no longer condone her attitude and therefore saw leaving her as the only solution to the problem.  Risikat said after she gave birth to two kids with blue eyes, Abdulwasiu’s family started complaining and that was why he left them.

Risikat told Mofe Bamuyiwa, the photographer who took these beautiful photos that she wouldn’t accept to change her eyes from blue to brown even if that could be done.she saw that as unneccesary since it was the way she was created. she also said she was comfortable with the way her eyes was and proud of it.  She gave birth to a set of twins, Hassanat and her late twin brother who happened to have brown eyes.

“She couldn’t speaker further but it’s has left us wondering”, Mofe says, but i guess she has more to say to us.